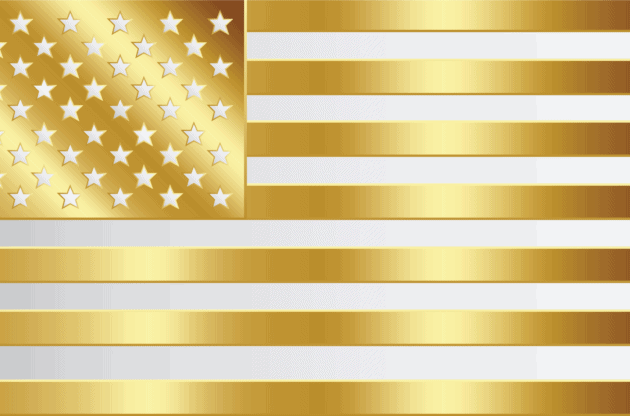 During my 20 years of military service, I developed a deep passion for freedom and liberty.

More specifically, it stems from my deployments and stations abroad, where I saw tyranny and the effects it has over the population.

Howard Buffett and the link between freedom and gold

A few weeks ago, I found a particularly powerful article written in 1949 by the Honorable Howard Buffett, US congressman from Nebraska. What amazed me the most was how relevant it was to where we are financially today.

Congressman Buffett, having just seen the effects of WWII, felt strongly that freedom depends on a gold-backed currency. He had seen Lenin, Mussolini, and Hitler all outlaw gold after taking control of their countries, which proved to be an effective strategy for heightening control over the monetary system. He saw a direct correlation between protection of purchasing power and freedom.

Howard Buffett gave the example that in 1948, China was able to devalue its currency because it controlled the yuan. As Buffett noted, “Under such conditions the individual citizen is deprived of freedom of movement. He is prevented from laying away purchasing power for the future. He becomes dependent upon the goodwill of the politicians for his daily bread. Unless he lives on land that will sustain him, freedom for him does not exist.”

But Howard Buffett also noted a much more sobering fact: “So far as I can discover, paper money systems have always wound up with collapse and economic chaos.” He noted that the US used to be on a true gold standard, where the dollar was backed by and exchangeable for gold.

This gave the people a unique and substantial way to control the spending of the government. When people felt that the government was wasting their money or acting frivolously, they could exchange their paper money for gold, thus taking it out of the government coffers. This also made the economy impossible for the government to game, or as American philosopher Ralph Waldo Emerson wrote: “The desire of gold is not for gold. It is for the means of freedom and benefit.”

How populism can lead to money printing

Buffett’s wisdom and understanding about the gold standard shine today when we examine his warning that without a gold standard there is no reason for the government to cap its spending.

Congress is constantly besieged by interest groups whose survival depends on demanding money that simply does not exist. Since these groups hold potentially swaying power in elections, the elected officials often feel they have no choice but to yield in order to secure their continued position. As Buffett noted, “With no bad immediate consequence, it becomes expedient to accede to a spending demand. The Treasury is seemingly inexhaustible. Besides the unorganized taxpayers back home may not notice this particular expenditure — and so it goes.”

He understood that the workingman had to earn his living, but that the government could simply print more to its own benefit. He was well aware of how this would be used as welfare spending: “But for most beneficiaries a Federal paycheck soon becomes vital in his life. He usually will spend his full energies if necessary to hang onto this income.”

Buffett pointed specifically to the rise of the Nazi party through Hitler and to the rise of Russian communism due to the civil unrest from the collapse of their monetary systems:

“It is worse than just the high prices that you have heard about. Monetary chaos was followed in Germany by a Hitler; in Russia by all-out Bolshevism; and in other nations by more or less tyranny. It can take a nation to communism without external influences. Suppose the frugal savings of the humble people of America continue to deteriorate in the next 10 years as they have in the past 10 years? Someday the people will almost certainly flock to ‘a man on horseback’ who says he will stop inflation by price-fixing, wage-fixing, and rationing.”

It’s hard to imagine that could happen here in America — the freest country on Earth — but we would be foolish to think it will stay this way without fighting for these freedoms and preventing the conditions that will move our citizens to choose tyranny to stop the financial pain.

It is what Buffett stated at the end of his article that should really give us pause, for it seems he pulled his words directly from our current state of affairs: “The paper money disease has been a pleasant habit thus far and will not he dropped voluntarily any more than a dope user will without a struggle give up narcotics. […] I can find no evidence to support a hope that our fiat paper money venture will fare better ultimately than such experiments in other lands.”

And once that experiment ends, Buffett continued, our government could turn to extreme measures: “Because of our economic strength the paper money disease here may take many years to run its course. […] When that day arrives, our political rulers will probably find that foreign war and ruthless regimentation is the cunning alternative to domestic strife.”

Americans are proving they won’t stand down

We have not yet hit the point of no return, and it is quite possible we never will. However, that does not mean that the “paper money disease” will not have a direct impact on our daily lives. Is there anyone who is not feeling the pain of inflation?

The questions each of us should ask ourselves are: Are you confident that the situation will correct itself or change course? How are you protecting yourself?

Gold is not only an asset, but it is also something that represents personal liberty and freedom. Gold continues to soar today even amidst these uncertain times as Americans across the country prove once more that they will not simply stand down as their freedoms, whether personal or financial, come under attack.

Matthew Wadler joined the US Army immediately after graduating from high school in 1991. Where most 19-year-olds were enjoying their freshman year in college, Matt spent this time in Somalia. He spent 6 years as an enlisted soldier before becoming an officer. He is a graduate from Airborne School, Air Assault School, and the Defense Language Institute. He has completed the Primary Leadership Development Course and the Officer Basic and Advance courses in addition to achieving his master’s degree. Along with his first deployment to Somalia, Matt was deployed twice to Afghanistan. He retired at the rank of Major.

The Effect of the Russia-Ukraine War on Americans