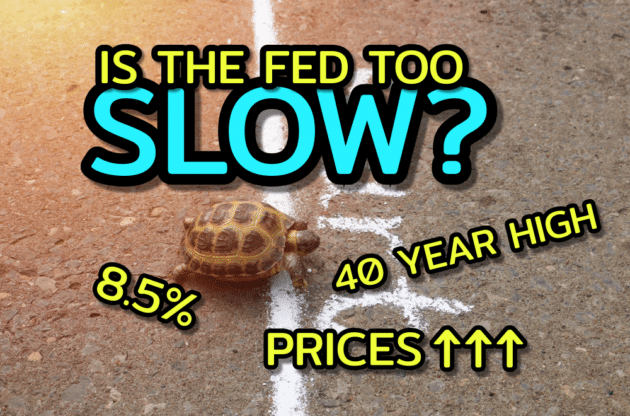 The inflation rate in the United States soared to 8.5% in April 2022, its highest level in over 40 years. The current surge reminds many of the 1970s’ and 1980s’ era of long hair, disco, Vietnam protests, and 15% inflation. Pressured by President Nixon to keep interest rates low and employment high, the Federal Reserve Chairman Arthur Burns failed to take any action to stem the rise in prices. The consequences of the delayed response led to economic recession, high unemployment (9%), and a protracted and painful stock market crash.

The Federal Reserve has specific tools to combat inflation:

The Fed fiddles as inflation soars

Jerome Powell, Chairman of the Fed, testifying before the House Financial Services Committee, acknowledged that the future is unsettled, especially following the Russian invasion of Ukraine. He told the Committee, “We are going to avoid adding uncertainty to what is already an extraordinarily challenging and uncertain moment.”

The Fed subsequently raised the Federal Funds rate by 0.25% on March 16, 2022, the first increase since 2018. Some question whether the increase is sufficient to blunt rising inflation. The chief financial analyst at Bankrate.com, Greg McBride, expects little impact from the raise, noting, “Nobody is going to have to downsize from the SUV to the compact [car] because of interest rates.”

In January 2022, Esther George, president of the Federal Reserve Bank of Kansas City, suggested that the Fed anticipate a strategy of “quantitative tightening” – buying securities through its open market operations to take money out of circulation and drive up interest rates. “With inflation running at close to a 40-year high, considerable momentum in demand growth, and abundant signs and reports of labor market tightness, the current very accommodative stance of monetary policy is out of sync with the economic outlook.”

The Fed needs to act now

The lack of clear direction disturbs many in the investment community

One of the leading investment experts, Blackrock’s Thomas Taw, in a Bloomberg interview, says, “The Fed’s tough talk is unlikely to translate into action.” Others do not doubt the Fed’s ability to curb inflation but wonder when and what the consequences could be. “Can the Fed bring down inflation? Yes, it absolutely can,” Steven Blitz, chief US economist at TS Lombard, said. “But the question is, what happens next? It’s a question of time.”

Former President of the Federal Reserve Bank of New York Bill Dudley claims that the Fed’s actions have been unsuccessful, writing that the Fed “bears responsibility for being so slow to recognize the inflation risks and begin to tighten policy.”

In his view, Dudley says, “To be effective, it will have to inflict more losses on stocks and bonds investors than it has so far…The stock market is only four percent or so off its high, still up very sharply from where it was a couple of years ago. And bond yields, 2.5 or 2.6 percent, are still really low, especially when you adjust for inflation. In my mind, the Fed hasn’t really accomplished much yet [to bring inflation down].”

What are the possible consequences of the Fed’s inaction?

Is a US recession on its way?

Nancy Tengler, CEO of Laffer Tengler Investments, reflects the view of many regarding a potential recession. In an interview with CNN Business, she said, “The recession drumbeat is gaining in volume. Of course there are many reasons to be concerned. Soaring inflation, rising energy costs, an almost sure recession in the Euro Zone and a dangerously flat yield curve.”

Current Fed Chairman Powell hopes that the Reserve’s cautious path to control inflation will result in a “soft landing.” When asked about the possibility, Dudley responded, “I think at the current environment [with] the unemployment rate at 3.6% and wage rates running well above a rate consistent with 2% inflation, the Fed [is] going to have to tighten it up to push up the unemployment rate. When the Fed has done that in the past, it’s always resulted in a recession.”

Former US Treasury Secretary Lawrence H. Summers, interviewed on Bloomberg’s Wall Street Week, believes that a recession in the near term is more likely than not. “We have never had a moment in the United States when inflation was above four [percent] and unemployment was below four [percent] when we didn’t have a recession within the next two years.”

From 2017 to 2021, the S&P 500 index consistently shrugged off bad economic news — Covid, supply breakdowns, war — and rose to new heights. The economy grew 18.6% during the five years, while investor optimism increased their assessment of their stock market investment via Price Earnings ratios by one-third (18.6 to 24.7).

Hedge fund manager Jeremy Grantham claims that stocks are in a “superbubble” like in 1929 and during the dot.com market in 2000. He notes that when bubbles break, “they crush most of those dreams and accelerate the negative economic forces on the way down.”

Preparing yourself for a possible recession

Jordan Kahn of ACM Funds told CNN Business that there are “definitely more opportunities on the short side of the market right now.” Professional money managers are trying to position themselves for a projected decline.

One of those managers is Rebecca Patterson, Bridgewater’s Chief Investment Strategist. In a Bloomberg interview, Patterson said, “What has given us diversification in our portfolios for the last forty years is not working…You need something that protects you from inflation that is higher than expected for longer than expected.” She recommends ownership of commodities, metals, and gold.

These are perilous times for individuals seeking to build a nest egg or those trying to protect the purchasing power of their accumulated savings. While no one knows the future, caution should be the rule. Diversification is important.

Gold on a Historic Tear: Why Goldman Sachs Just Raised Their Gold Forecast

How Weaponizing the Dollar Will Destabilize It

The post Waiting to Act — How the Fed’s Passive Approach Could Cost You Big appeared first on Gold Alliance.