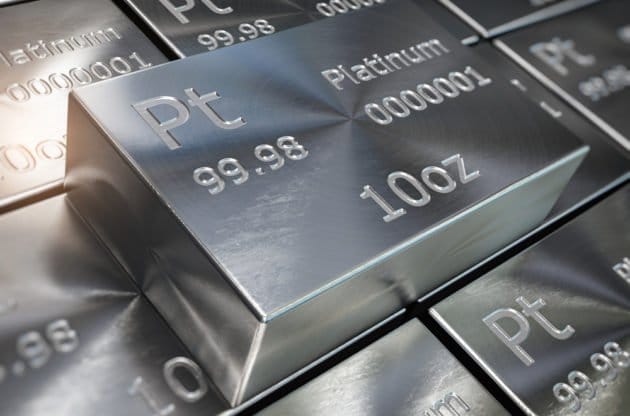 Will platinum hit $3,000 an ounce? With all of the uncertainty in the world, people are asking, “What is the future price of platinum” and “Does platinum have a future?” Platinum has been known as an option for people during times of economic instability. It probably won’t surprise you to hear that many financial experts think it’s likely that the platinum price could go up and hit an all-time high.

The current price of platinum and its recent history

The current price of platinum per ounce, at the time this article was last updated, is $977.00 (you can also view our live platinum price update ticker at the top of every page on our website.

The first way to answer the question, “Will platinum prices rise in 2022?” is to look at the current price of platinum compared to its price in current history. Platinum’s current price is under half of its all-time high of $2,276.00 in 2008. Right now, platinum prices are considerably low. However, if you look at the last 5 years, you’ll see that platinum has sustained its value, with occasional peaks and valleys. As an additional price resource for platinum, you can use our precious metals calculator below to see an interactive price history. Simply click on the “platinum” tab to view platinum’s price history.

What factors could make platinum go up to $3000 an ounce?

While the cost of platinum would need to rise over 300% to reach $3000 per ounce, there is still a possibility that it could happen in the next decade or two.

Will platinum prices go up? Here are the factors that could drive the price of platinum to new highs.

1. The Supply Of Platinum Is Down

2. The auto industry has a high demand for platinum

The vehicle shortage can be felt across the country. When the chip shortage is over, automotive dealers will be scrambling to make enough cars to meet the demand, and one of the things they when manufacturing new vehicles is platinum. Platinum is a massive component in catalytic converters, and is essential to building new vehicles. The potential demand for more platinum from the auto industry could bring the price of platinum to new highs.

3. Medical uses for platinum could increase the demand for the precious metal

You probably already know that precious metals are in high demand in various industries. However, platinum is also a biocompatible metal, which means it rarely causes massive reactions when used in permanent medical applications such as pacemakers as well we surgical equipment. As the Baby Boomer generation reaches its golden years, this could boost the need for platinum in the medical field.

4. Platinum is used in technology

More and more tech companies are using platinum in liquid crystal displays. The precious metal also can increase storage density in servers that are used for cloud storage. The technological applications for platinum are increasing, and could increase the demand for platinum, which could lead to the price of platinum skyrocketing sooner rather than later.

5. Rising inflation in the United States could be a sign that precious metals prices are increasing.

Inflation can contribute to the rise in value and pricing for precious metals like platinum. As the demand for platinum grows, the intrinsic value of the precious metal could grow with it, and fast. Meaning, it becomes more and more difficult for inflation to hurt the value of platinum. It can, in effect, become a store of wealth during inflationary times.

How long would it take for platinum to reach $3000 an ounce?

Will platinum hit $3000 an ounce soon? While we cannot predict the future, we can consider all we’ve learned thus far.

It’s time to connect the dots. Dot number 1: The cost of platinum is rather low at the moment. Dot number 2: The production of platinum has fallen. Dot number 3: More and more industries are increasing their demand of platinum to manufacture their products. This could be considered an issue that few are really paying attention right now, which could mean it’s a good time to turn to platinum.

What is the best way to learn more about platinum?

Do you want to know more about how you can acquire platinum for your savings? Contact our team today. They are standing by to assist you in acquiring platinum for your Precious Metals IRA or direct purchase. Call us today at (888) 734-7453, and don’t forget to ask about our Inflation Survival Guide to help you determine if precious metals are the right asset for you.

The Effect of the Russia-Ukraine War on Americans

Gold on a Historic Tear: Why Goldman Sachs Just Raised Their Gold Forecast

The US Dollar
6 Min Read

How Weaponizing the Dollar Will Destabilize It

Learn everything you need to know about owning gold and how Gold Alliance can help.

Get a Free Guide

Why Gold?
FAQs
About us

The post Will Platinum Hit $5,000 an Ounce? appeared first on Gold Alliance.