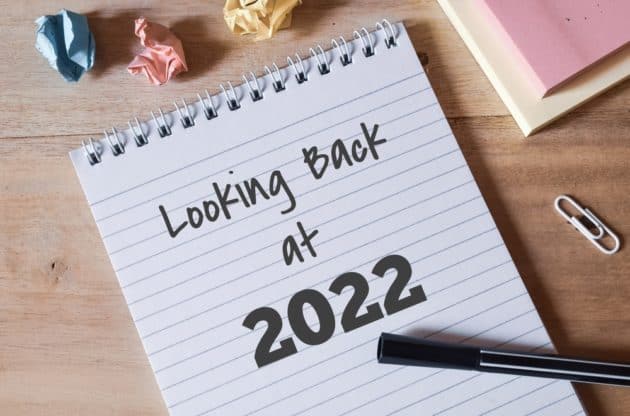 2022 has been a wild ride of political turmoil, economic ups and downs, and life finally getting back to some variation of post-pandemic normality.

Let’s take a look back at some of the highlights of the year.

January 3: Apple hits a market value of over $3 trillion and becomes the first publicly traded company to do so.

February 1–9: Over the course of eight days, Winter Storm Landon (the Groundhog Storm) sweeps 19 states from Texas to northeast Maine, dumping 6–12 inches of snow in some areas.

February 13: The Bureau of Labor Statistics (BLS) announces that the US inflation rate has reached 7.5% as prices of consumables begin to increase more rapidly.

March 27: Will Smith slaps Chris Rock at the 94th Academy Awards over comments made about Smith’s wife Jada Pinkett Smith.

March 31: After more than 30 years, scientists of the Human Genome Project sequence the complete human genome.

April 4: The Kansas Jayhawks come back from a 16-point deficit and defeat the North Carolina Tar Heels in a College Basketball National Championship Game.

May 4: The Federal Reserve raises the funds rate by 0.75 percentage points to fight inflation. It’s the largest increase since May 2000.

May 23: New York City removes its last public payphone and delivers it directly to the Museum of the City of New York.

June 15: Thousands lose power as a widespread heatwave affects the Midwest and Southern states with temperatures reaching well over 100 degrees.

June 16: The Warriors overtake the Celtics for the NBA Championship.

June 26: The Colorado Avalanche defeats the Tampa Bay Lightning to take home their first Stanley Cup in over 20 years, stopping the Lightning’s three-peat.

July 12: NASA releases the first full-color image from the James Webb Telescope, which includes a galaxy cluster that is 4.6 billion lightyears from Earth.

July 13: The BLS announces that inflation crushed a decades-old high, reaching 9.1% for the 12 months ending in June 2022.

August 6: The San Diego Zoo announces the birth of a White Rhino calf, Neville, giving a glimmer of hope for the endangered species.

August 11: The CDC announces that Covid-19 is no longer at a level where it “severely disrupts our daily lives” and loosens up guidelines.

September 18: The Las Vegas Aces take their first WNBA Championship against the Connecticut Sun in the 2022 WNBA Finals.

September 26: NASA sends a spacecraft on a crash course toward an asteroid in hopes of knocking it off course, successfully altering its orbit by approximately 32 minutes.

October 13: US inflation starts to “cool” and sits at 8.2% for the year ending September, according to the BLS.

October 27: After a lengthy court battle, Elon Musk buys Twitter and proceeds to dismantle the inner workings of the social media platform.

November 20: The opening ceremony of the 2022 FIFA World Cup begins the tournament in Qatar.

December 13: The latest data from the BLS shows the US Inflation rate remaining high at 7.1%.

December 21–26: A historic extratropical cyclone brings blizzard conditions and winter storm to much of the United States.

Why Are Gold and Silver a Main Theme of Christmas?

The Courage During the Battle of Baltimore

The post 2022 Year in Review appeared first on Gold Alliance.