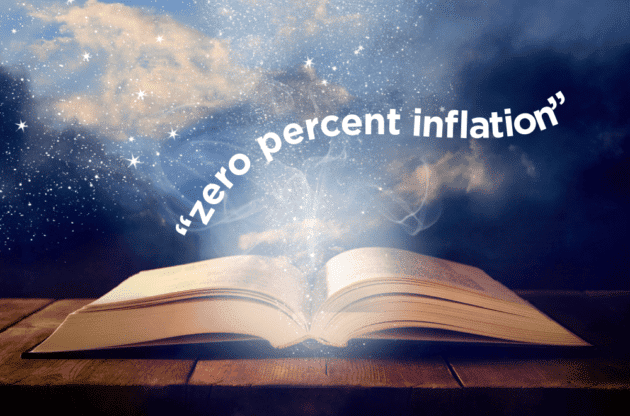 It was a great summer for the Biden Administration.

So, it’s no wonder President Biden is optimistic.

And it’s easy to understand why his starry-eyed supporters might believe the White House is on a roll.

But no matter how optimistic you are, you can’t change reality. Unless, of course, you write your own narrative. One that might convince voters that the economy isn’t as bad as it seems. For example, this little gem from the White House:

White House Narrative #1: “The economy had zero percent inflation in the month of July”

In a well-orchestrated press briefing in August, this is what the White House had to say about the price increases that are still haunting consumers:

“The economy had zero percent inflation in the month of July [2022],” Biden declared.

That is — technically — true: From June to July, inflation was 0%. Hurray!

Here’s how ugly inflation really is. The black line in the chart shows how much the consumer price index has gone up compared to a year ago, and the vertical bars show the monthly change:

The 0% change from June to July, by the way, was the only time in the past 27 months that the month-over-month inflation rate didn’t increase.

Not surprisingly, Biden’s statement provoked responses both from the media and from across the aisle…

The White House is a bit confused.

The reactions to Biden’s “0%” comment didn’t seem to rock his boat, however. The inflation data for the year ending in August came in at 8.3% with a month-over-month increase of 0.1%. Biden’s optimism was unwavering — here he is on 60 Minutes:

“We’re in a position where for the last several months [inflation] hasn’t spiked. It has just barely—it’s been basically even.”

Let’s ignore for a moment that inflation did spike, reaching 9.1% in June — its peak so far in this inflation cycle. The truth is that inflation consistently staying over 8% isn’t good news. “Basically even” just means that prices overall haven’t increased further and not that we don’t feel the severe impact of inflation.

With that in mind, it’s no surprise that inflation is a top concern among Americans. A recent poll by POLITICO/Harvard found that 51% of respondents say inflation is “extremely important,” more than any other topic, including “economy and jobs.”

“I’m — more optimistic than I’ve been in a long time,” Biden continued on 60 Minutes before the conversation moved on to our economy.

Scott Pelley: “Sir, with the Federal Reserve rapidly raising interest rates, what can you do to prevent a recession?”

Biden: “Continue to grow the economy. And we’re growing the economy. It’s growing in– in a way that it hasn’t in years and years.”

That’s only true if the White House ignores official data and rewrites the narrative. Here’s what really happened:

If Biden interprets a decline in GDP as “growth,” then he is right. GDP fell 1.6% in the first quarter of 2022 and 0.6% in the second. The only other times in the past five years that GDP “grew negatively” were in the first half of 2020, when the pandemic hit.

So, we’ve had two consecutive quarters of negative growth. That, technically, means we’re already in a recession. How’s the White House interpreting that?

White House Narrative #3: “We’re not going to be in a recession”

Ahead of the release of the second-quarter economic data, the White House said that even two quarters of declining GDP was “unlikely to qualify as a recession.”

But it’s likely that we’ll see another decline in GDP when the government releases data for the third quarter. Just look at how the forecast from the Atlanta Fed (the green line in the chart below) has dropped over the past two months. Their latest forecast says 0.3% growth, down from an optimistic 2.5% just a month ago…

Wall Street reacted strongly to the latest inflation data and to the Fed’s latest rate hikes with declines in the stock market. A clear contrast to the Administration’s optimism.

If GDP drops again, if inflation rises again or remains high, and when the Fed raises rates again, it may be an additional breaking point for Wall Street. No amount of optimism would be able to change that.

The Biden Administration is rewriting the real narrative

We’ll have to wait and see how the White House will spin the story when the next data on inflation and the economy is released. For now, you may wonder if the Administration is believing in its own optimistic narrative or if it’s all politics, an attempt to convince you that everything is going well ahead of the midterms.

Either way, it’s worth considering if you can trust an overly optimistic government to fix inflation and, indeed, create economic growth when they seem so far removed from the reality the rest of us are experiencing every day.

If you don’t share Biden’s relentless optimism or if you have any doubts about the government’s abilities to rein in inflation, it might be time to look at ways to protect your purchasing power.