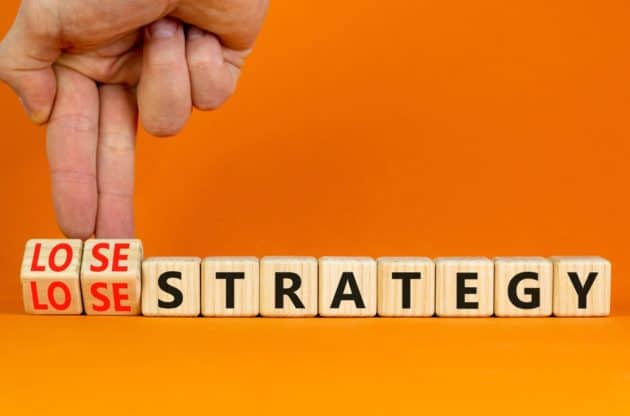 The audience shimmered with expectation as Fed Chief Powell began to speak.

If Powell announced a Fed pivot, bears would head for cover and bulls would run free. And the stock market would jump back on track to reach record highs.

But Powell dashed all hopes of a Fed pivot. He said investors were getting ahead of themselves and thoughts of a potential pause would be “very premature.”

The stock market rally before the Fed meeting was also premature. And when investor hopes turned to disappointment, the rally fizzled out.

But if the Fed eventually does pivot, is the market optimism warranted? In other words…

Will a Fed pivot trigger a stock market bull run?

Probably not, says history. At least not immediately.

Historical data shows stock prices tend not to rise for at least 12 months after an initial Fed rate cut.

For example, the Fed hoped for a market rally when they started cutting rates after the 2001 Dotcom crash. Instead, stock prices continued their collapse with a 44% drop over the next 21 months — straight to the bottom by 2003.

During the 2007 subprime mortgage crisis, the Fed started cutting rates again. This time, they hoped to prevent a full-scale recession. But the pattern repeated, and over the next 19 months, the S&P 500 plummeted 56% — straight to the bottom by 2009.

But what about the stock market rally during the pandemic?

When the entire economy crashed in early 2020, our government acted immediately. It cut rates to zero and showered Americans with unemployment benefits. It passed out stimulus checks like candy. And it injected $3 trillion into the economy over just three months.

A similar scenario is unlikely today. The last thing our inflation needs is more fuel to the fire. The Fed may pivot at some point and ease its monetary policies to avoid a recession. But at most, it may cut rates.

This means even if the Fed pivots in December, it may take investors a long time to recoup 2022’s and a foreseeable 2023 market losses. And they may even have to wait until deep into 2024 to see any gains at all.

But as discussed in “The Fed Rate Hikes’ Effect on Inflation and the Economy,” Powell has not indicated a Fed pivot is forthcoming.

And Chief Powell isn’t the only hawkish Fed official:

And Boston Fed President Susan Collins says the central bank may even target higher rates than they expected: “There has been a bit of disappointment in some of the data [so that has] broadened my view of where the rate that will be sufficiently restrictive might be.”

How high rates will have to go to become “sufficiently restrictive” remains unclear. And the stock market may still rally before the Fed’s December press conference. But if history repeats, any short-lived rally we see may precede a months-long slide to the bottom.

The post Fed Pivot or Not — Stocks May Be Stuck  in a Lose-Lose Situation  appeared first on Gold Alliance.