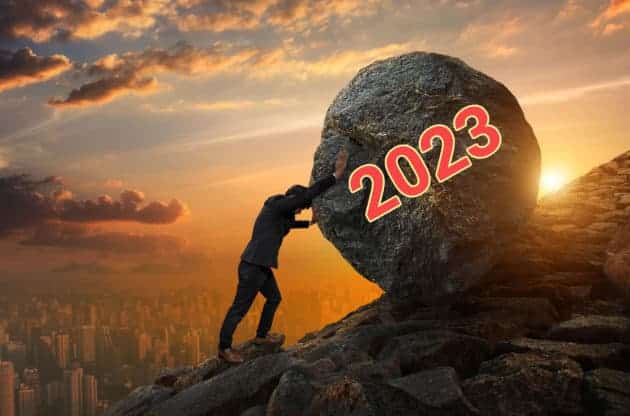 2022 has delivered more than its fair share of bad news.

And though investors hope for a brighter forecast for 2023, we may face more bad news in the coming months. Because experts say this year’s challenges may trigger a recession in 2023.

In other words, the economy may soon go from bad to worse.

But despite the inevitable challenges, some fortunate folks may have reason to celebrate.

We’ll get back to that in a moment.

First, let’s take a brief look at some of the biggest challenges we may face in 2023.

We’ve already seen four jumbo rate hikes of a whopping .75 percentage points in less than one year. As the chart below shows, that’s faster than in any recent tightening cycle:

Prices of basic goods are still sky-high. People are watching the purchasing power of their savings shrink away. And some experts are starting to believe high inflation may last for years.

So, how high must the Fed raise interest rates to tackle inflation?

Fed Chief Jerome Powell slowed down the rate hike pace a little in December, raising the rate by 0.5 percentage points. But, he says, the Fed “will stay the course until the job is done.” And on their Dec. 14 meeting, Fed officials signaled more rate hikes in 2023.

And former Treasury Secretary Larry Summers thinks the Fed may have to raise rates to 6%.

But the outspoken president of the St. Louis Fed, Jim Bullard, believes the central bank might have to raise rates all the way to 7%

These rate hikes are already hurting the economy. And we’ve seen their debilitating impact on the stock market.

How will more jumbo rate hikes impact the national debt (and your financial future)?

As you may know, the US government has racked up a stunning $31 trillion in debt.

For years, the US enjoyed low inflation and high economic growth. So, Washington continued to borrow and spend to the moon. And politicians paid little attention to the mounting debt bill.

A crouching economy and soaring consumer prices forced Uncle Sam’s hand. And we paid $737 billion in gross interest on the debt.

According to CNN, that astonishing interest payment is so big it “rivals the nearly $800 billion that is expected to be spent on defense in fiscal 2023.”

This debt burden leaves less room for Congress to spend money on “other priorities.” Think everything from infrastructure and education to veterans’ benefits and beyond.

As a result, Congress will have to make difficult spending decisions for 2023.

But regardless of what lawmakers decide, Moody’s Analytics economist Dan White says the debt problem is “really going to handcuff [the government].”

And this brings us to the next possible economic challenge for 2023:

The European energy crisis may spread to the US

The whole of Europe relies on Russian natural gas. But in response to the EU’s support for Ukraine, Moscow has almost completely cut off Europe’s supply — causing massive gas shortages and soaring energy prices.

If winter is relatively mild and Europe is able to send gas where it’s needed the most, the EU might dodge a severe downturn.

But if the winter is harsh and Russia keeps throttling the oil supply, Europe may look to the West for help.

Demand for gas may rise as Europe scrambles to fill the supply gap caused by Moscow.

And this supply gap will push natural gas prices even higher

Crude already peaked at $130 per barrel earlier this year. But with Russian sanctions, increased Chinese demand, and OPEC supply cuts, crude prices could rise even higher in 2023.

Now, throw in problems with the vulnerable housing market. Add the deteriorating ties between the US and China…

And if the challenges above all happen at once, Bloomberg Economics says $5 trillion in global output could vanish into thin air.

But even if not all the challenges happen at once, our economy could still shift from bad to worse

Bloomberg says the Fed’s rate hikes alone could send the US into a recession. And if that happens, 2 million Americans may lose their jobs.

Of course, it’s easy to feel pessimistic about the economy after years of COVID, war, and scarcity.

But it’s not all doom and gloom, as some analysts say. The challenges of 2023 may bring excellent news for gold owners.