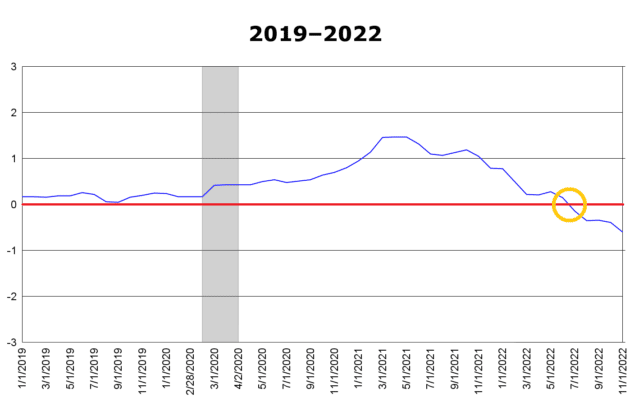 Take a look at this rare chart pattern.

What you’re seeing is a recession-predicting signal with a near-perfect track record.

Wall Street Journal says it is often a “red flag that a recession is looming.” Forbes says it has “accurately predicted the ten most recent recessions.” The NY Times says this pattern “has preceded every recession for the past half-century…. it’s seen as a harbinger of economic doom. And it’s happening now.”

Analysts call this omen of recession an “inverted” yield curve.

And while it may signal bad news for the economy…

It may also signal very good news for gold owners, as you’ll see in a moment.

First, what exactly IS an “inverted” yield curve?

Most of the time, short-term bonds pay lower yields. And longer-term bonds pay higher yields because investors expect the bond issuer to reward them for letting it keep their money longer.

That is an inverted yield curve.

And right now, The New York Fed is keeping a very close eye on it. Central banks worldwide are watching it. Wall Street is watching it. And gold owners who know this pattern’s history are paying sharp attention too.

But why is everyone so focused on the yield curve inversion?

What would make you want to pause and pay sharp attention right now?

As you can see, since 1976, every time the yield curve has “inverted,” a recession has followed in 6–18 months.

Now, here we are again.

The yield curve inverted again on March 31, 2022. And many experts believe this indicates a recession may be coming soon.

“The yield curve is definitely telling you a recession is coming. It’s not here yet but the check is certainly in the mail,”

And many of those recessions have preceded rallies in gold prices.

So, yes, as Bank of America interest rate strategist Mark Cabana says, the current yield curve inversion may mean “we are likely heading for a recession.” And it may be speeding our way soon.

But if history repeats, a recession may once again trigger a gold rally. This means right now may be a historic gold-buying opportunity. And some gold owners may soon have a very good reason to rejoice.