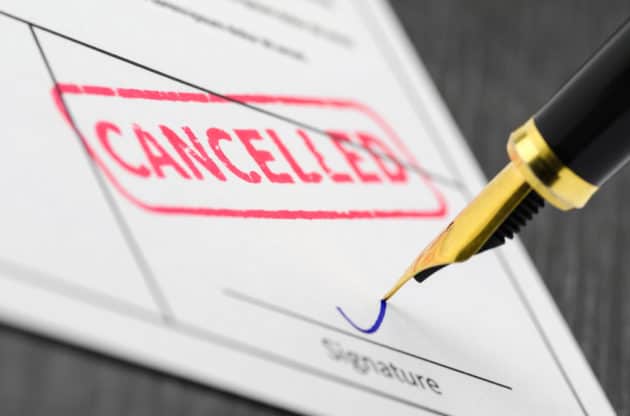 It’s the time of year when businesses ramp up hiring and fill inventories in anticipation of the holiday shopping rush. So, why are retailers such as Walmart, Target, and Macy’s canceling orders and laying off workers?

Their behavior may have seemed irrational in a healthy economy. But some industry experts and analysts say it’s financial self-defense. Retail giants are preparing for a potential economic downturn.

“[We have] canceled billions of dollars in orders to help align inventory levels with expected demand.”

In other words, Walmart expects consumer demand to be lower than usual during the busiest shopping season of the year.

According to Neil Saunders, the Managing Director of GlobalData Retail, Walmart has never canceled orders on this scale before. He says it’s a reflection of “how much consumer demand has changed and how much of a glut of product Walmart currently has and needs to work through.”

America’s retail behemoth is bracing for a possible global recession.

But Walmart isn’t the only retailer taking a defensive stance.

Several US mega-retailers are scaling back:

Target says it will cancel over $1.5 billion of orders and liquidate surplus inventory due to weak market demand and dwindling consumer confidence.

And other leading retailers — including UnderArmour, Kohl’s and Macy’s — are all cutting prices. Each hopes to shed the excess inventory collecting dust on their shelves.

Walmart and other retailers’ language is shrouded in corporate speak. But the underlying message seems clear:

US retailers are preparing for the worst.

And they aren’t the only ones worried about dropping sales. Some leading businesses are already suffering from the impact:

Troubling signs in the transportation sector

In recent months, the global transportation sector’s performance has weakened — a clear sign that trade growth is stagnating.

In fact, data from the World Trade Organization suggests that global trade growth is slowing. It’s now below the short-term trend line.

And there are other concerning signals.

Global container traffic is contracting. Ocean booking levels are well below their two-year highs. And the market caps of some large shipping companies are valued at less than their yearly profit, which shows the markets have a dim view on their prospects.

The message from one major transportation company is a little less muted.

The CEO of FedEx, Raj Subramaniam, shared a bleak sentiment during a recent interview with CNBC’s Jim Cramer.

When Cramer asked him if he believed a global recession is imminent, the FedEx CEO replied, “I think so. But you know, these numbers, they don’t portend very well.”

Subramaniam’s chilling outlook on the global economy is no surprise. Just look at the company’s performance: FedEx missed expectations for earnings per share and global revenue growth.

FedEx is, says Subramaniam , “a reflection of everybody else’s business, especially the high-value economy in the world.”

If the global economy is a reflection of FedEx’s performance, we’re in deep trouble.

Outside of the business world, several prominent financial institutions are looking ahead too. Even the Federal Reserve seems to be aware.

Interpreting Powell — The Fed is preparing for a recession

The Fed doesn’t issue official recession warnings. So, it’s important to pay attention to the language and tone that the central bank’s officials use.

Here’s Chairman Jerome Powell’s remarks, which could suggest the Fed is preparing for things to go downhill:

“Reducing inflation is likely to require a sustained period of below-trend growth […].While higher interest rates, slower growth, and softer labor market conditions will bring down inflation, they will also bring some pain to households and businesses. These are the unfortunate costs of reducing inflation.”

“Below-trend growth” is gentle Fed speak. In the first half of 2022,  GDP has declined.

And with “some pain to households and businesses,” Powell may be preparing us for the consequences of raising interest rates month after month: a recession.

Other institutions are much less vague:

The International Monetary Fund and the World Trade Organization are both warning that countries around the world are sliding into a “global recession.”

So… Major retailers are expecting a significant downturn, dwindling demand is already impacting the transportation sector, and global institutions are warning about a global recession.

They all seem to be preparing for what looks like the inevitable. Are you?

The Surprising Reasons for Gold’s Sluggish Response to Inflation

Is Biden’s Student Loan Forgiveness Good for Us?

What the Drop in Home Values Could Mean