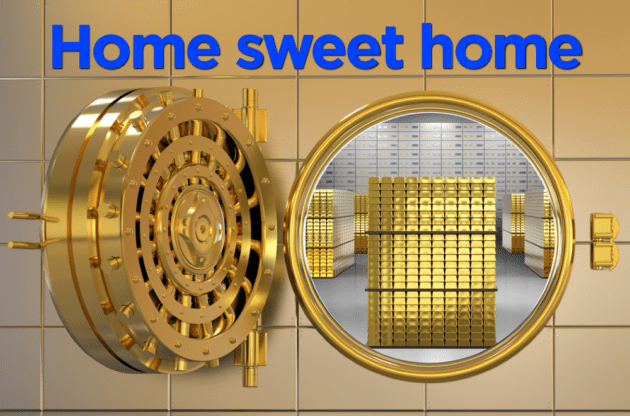 For the past decade, central banks worldwide have been moving more and more of their gold reserves from foreign depositories to secure domestic sites.

They are moving their bullion due to concerns about the stability of the global financial system, seeing security in owning large amounts of gold under their national lock and key. Some countries, including the US, the UK, and China, are even claiming to hold 100% of their gold within their national borders.

Why are central banks moving their gold reserves?

The main reasons for bringing home their gold seem to be the US dollar and our government’s actions:

The global financial system — international worries about the dollar’s stability

Despite having been the unquestioned #1 reserve currency for decades, there are growing concerns about the dollar’s soundness. The dollar’s perceived weakness results from decades of excessive money printing, which has diluted its purchasing power and resulted in high inflation.

France, for instance, has been a long-term critic of the US “printing much more dollars relative to the gold they had backing those dollars.” Unsurprisingly, the Banque de France repatriated 221 tons of its foreign gold reserves between 2013 and 2016.

Foreign critics also question whether the US can continue to service its growing debt in a potentially depressed economy in the future, especially combined with surging inflation. The stability of the greenback is key in a world dominated by that currency. Germany moved 674 tons (300 tons from the US and 374 tons from France) to the Deutsche Bundesbank facility in Frankfurt. The bank explained the move in its publication Germany’s Gold: “Gold is the bedrock of stability for the international monetary system.”

By repatriating their gold, governments and their central banks can ensure access to their precious metals reserves whenever needed. If the dollar and the financial system are derailed or crash, the central banks will have easy access to their gold, which may not only act as a store of wealth but could form the foundation for an emerging reserve currency. Many observers believe a fiat or digital currency backed by gold will replace the existing reserve currencies.

Security and control — governments are aware of the confiscation risk

Having access to their gold reserves is key, especially since the willingness of the US to “weaponize” the dollar to achieve its goals has exposed the possibility that “international partners can betray you,” according to Former Slovakian Premier Robert Fico in 2019. “I guarantee that if something happens, we won’t see a single gram of this gold [held outside of the country]. Let’s do it [repatriation] as quickly as possible.”

We’ve seen how our government has weaponized the dollar several times. Most recently, the US removed Russia from the global dollar-based transaction system SWIFT and froze its US assets. Other countries have been targeted as well, including Cuba, Venezuela, and North Korea. Storing gold reserves within its own borders reduces the risk for a country of confiscation or losing access to its gold when it needs it.

Gold is the perfect piggy bank – it’s the ‘anchor of trust’ for the financial system. If the system collapses, the gold stock can serve as a basis to build it up again. Gold bolsters confidence in the stability of the central bank’s balance sheet and creates a sense of security.

France and Germany are not the only ones moving their gold back home. Data collected by the World Gold Council show that countries that repatriated their gold in the past decade also include the Netherlands, Hungary, Poland, Belgium, Austria, and Switzerland.

According to George Milling-Stanley, head of gold strategy at State Street Global Advisors, “This is part of a trend that began as long ago as 2010. That was when central banks switched over from sales to net purchases.”

Central banks added more than 4,500 tons to their gold reserves during the past decade.

And according to Adam Glapiński, the president of the National Bank of Poland, “Gold is the ‘most reserve’ reserve asset: it is a kind of confidence anchor, especially in times of tensions and crises … gold secures Poland’s financial strength even in extremely unfavorable conditions.”

What lies ahead for the price of gold?

The stockpiling of gold by central banks can be both a bad sign and a good sign. On the negative side, the central banks may see a level of uncertainty or crisis ahead of us that triggers their repatriation of gold. On the positive side, this move shows the importance of having accessible gold reserves and confidence in gold as a store of wealth.

And perhaps the banks share a belief that the price of gold could even rise: A recent study found that gold responds “positively to rises in economic policy uncertainty, geopolitical risk, and volatility in the US, UK, European Union, and China …” These are all great reasons to own gold, whether you’re a central bank or a private citizen.

The post Why Are Nations Repatriating Their Gold Reserves? appeared first on Gold Alliance.