The Dark Side of America’s New Economic Growth Reports 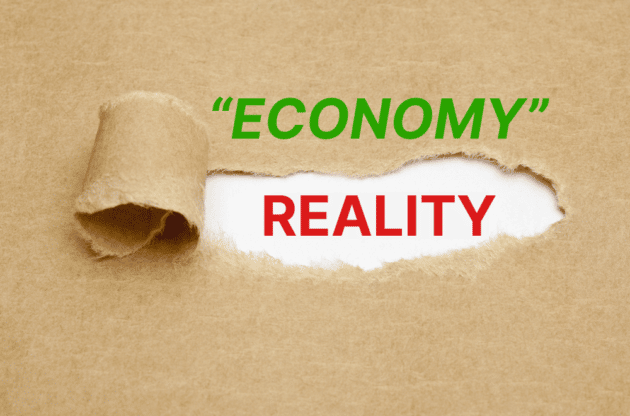 … and why it may mean a bright future for gold owners

Well, it looks like Fed Chair Jerome Powell can breathe a small sigh of relief… for a moment.

Because official new reports show Powell’s inflation-reduction attempts now appear to be “working.” The Bureau of Labor Statistics says inflation is down to 6.5% from its peak in June. And the US Bureau of Economic Analysis reports the economy has grown by 3.2% after two consecutive quarters of 1.6% and 0.6% decline.

These numbers look promising at face value. And we’d all like to see prices of goods and services fall back to earth.

But when you look a little closer, a very different picture of the US economy emerges

Because the truth is, despite the encouraging reports, America’s biggest companies aren’t expanding their workforces as you might expect in a “growing economy”…

Instead, nearly every industry is firing employees.

For example, look at the tech industry:

Twitter cut about 5,000 employees since Elon Musk took over — over half the company’s workforce.

Zuckerberg’s Meta is sacking over 11,000 people back to the unemployment line.

Amazon is canning a whopping 18,000 workers in the biggest firing spree in the company’s history.

And THAT is only the tip of the economic iceberg…

And what about America’s financial front line?

Goldman Sachs says it will lay off 3,200 workers in 2023 due to “concerns that the economy will slow further this year.” Citigroup is eliminating dozens of jobs. So are Morgan Stanley, ING, and Deutsche Bank.

Does this sound like a growing economy to you?

If the economy is looking up, then…

Why are America’s biggest job creators paring down?

Simple. They believe a punishing recession is either about to sweep the nation or already here. Labor costs are soaring. And cutting employee costs now is one way the companies can prepare for a downturn that may last for some time.

As you may know, one of the biggest indicators of a troubled economy is the stock market.

In fact, the US stock market has typically dropped during recessions.

True to form, the stock market’s performance was dismal in 2022. In fact, Forbes Advisor says the S&P 500 closed out 2022 with “the worst calendar year performance since 2008.”

During every significant economic downturn like this in US history…

While industries crumbled, investments fell off a cliff, and folks saw savings go up in smoke…

Gold did what it typically does:

It rebounded, skyrocketed, and made some folks richer.

And if expert forecasts are correct, we may see gold soar to record heights in 2023.

Bank of America says the price of gold could exceed $2,000 per ounce.

And Swiss Asia Capital analysts believe gold may jump to at least $2,500 and could even thrust to $4,000.

And one of the best ways to protect your purchasing power is a Gold IRA.

Because if the actions of America’s biggest companies foresee a recession, we may be long way from a soft landing.

So, for all those unfortunate folks caught in the corporate firing line, 2023 will be a year of hard change.

And the future remains uncertain for those who aren’t prepared for an economic downturn. But for some well-prepared Gold IRA owners, 2023 may present a historic growth opportunity.

Get a FREE copy of our 2023 Gold Information Kit personalized to match your needs and goals. Or dial toll-free 800-570-9516 for a FREE, no-obligation consultation with a friendly Gold Specialist who can answer all your questions.

The post The Dark Side of America’s New Economic Growth Reports appeared first on Gold Alliance.