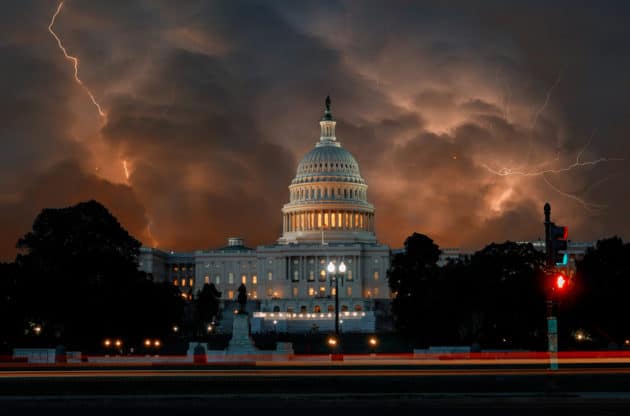 Imagine, for a moment, that you had a magic credit card with a billion-dollar limit.

And if you’re a little short on funds when the bill comes due? No problem! The credit card company raises your limit, and your spending spree continues unchecked.

As bizarre and unrealistic as this financial fantasy sounds, it’s a privilege the federal government has exercised 90 times. Each time they’ve hit their borrowing limit, Congress has raised it.

And now, after reaching their limit again, on Thursday, January 19th…

On one side of this fiscal duel, Republicans are taking aim at the government’s jaw-dropping $31 TRILLION national debt bill — which is now over 120% of GDP.

On the other side of the battle, the Democrats want to raise the debt limit and spend more, even though it puts the nation deeper in debt. And POTUS has made his position clear on the matter, saying “Republicans just have to let us do our job; just get out of the way.”

This Congressional battle puts the nation in a precarious position

And the two sides must reach a bipartisan decision to raise the limit soon, or the federal government could default on its debts for the first time in US history.

If that happens, Treasury Secretary Janet Yellen says it would “cause irreparable harm to the U.S. economy, the livelihoods of all Americans, and the global financial stability.”

NBC News says the range of consequences includes a “stock market crash, a recession, higher interest rates for consumers, a weaker dollar, a U.S. credit downgrade and a government unable to meet all its obligations, from funding the military to providing Social Security benefits.”

The NY Times agrees and calls it “an economic time-bomb…” that “[e]conomists and Wall Street analysts warn … would be economically devastating and could plunge the globe into a financial crisis.”

And Mr. Biden acknowledged the urgency of the situation in no uncertain terms:

“…people may see the value of their retirement accounts shrink. They may see interest rates go up, which will ultimately raise their mortgage payments and car payments. And the American people — look, I just say it this way: As soon as this week, your savings and your pocket — your pocketbook could be directly impacted by this Republican stunt.  It’s as simple as that.”

If this sounds familiar to you, here’s why:

President Obama and the Republicans faced a similar dilemma in 2011. And the impact of the Congressional in-fighting wasn’t pretty.

And a dark financial cloud blanketed the economy for half a year.

Now, as Congress squabbles over the issue for the 91st time, Janet Yellen says it’s time to take “extraordinary measures” — which means raise the debt limit fast or default and let the chips fall where they may.

But unless high inflation, a looming recession, rising international political tensions, waning foreign confidence in the US dollar, and America’s ballooning debt problem are addressed…

Raising the borrowing limit may buy the federal government time to shore up some of their debt, but it’s a bit like putting a Band-Aid on a broken leg.

And a default on their debt may have long-term consequences for the economy and for those who don’t take steps to prepare now.

Either way, Congress must decide soon

If they can’t reach a quick decision, the Bipartisan Policy Center says a default could happen on the so-called “X-Date,” which NBC News predicts may be in early June.

And this means the clock is ticking…

Don’t let a possible economic downturn shrink your savings. Discover how to help protect your purchasing power and secure your long-term financial future with gold while you still can. Our new Gold Information Kit explains everything.
>> Click here for 100% FREE access

The Dark Side of America’s New Economic Growth Reports